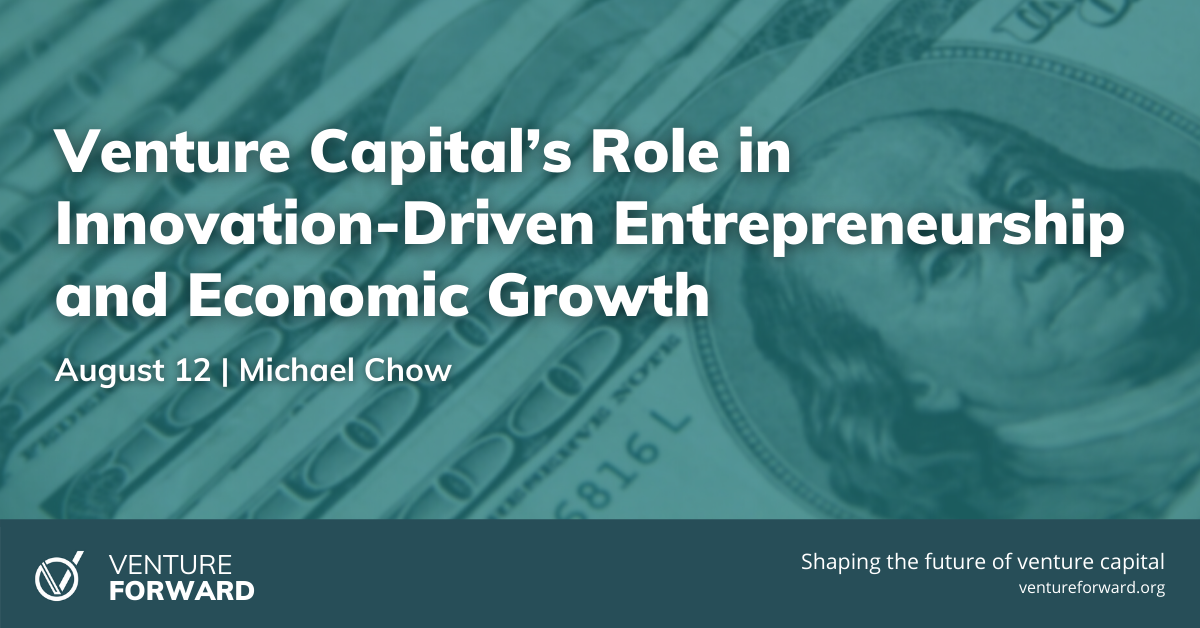 Producing new insights and sharing third-party or academic research on the impact of venture capital is a key focus for Venture Forward in its mission to drive the narrative of VC and inform the public about the critical role the VC industry plays in the U.S. economy. Venture capital as an investment vehicle with active management is oftentimes misunderstood, and startups receiving VC funding can be mischaracterized with other segments of the economy. Research, like the one highlighted in this blog post, that quantifies and better explains the positive relationship between high-growth startups on economic growth is important to both VC investors and industry outsiders in understanding the broader impact of the venture industry beyond innovation and financial returns.

Innovation-driven entrepreneurship (IDE) is the principal driver of economic growth among all forms of entrepreneurship. Such is the finding of a growing body of academic literature which distinguishes between the contributions of self-employment, small and medium size enterprises, and technology- and innovation-driven startups to increases in gross domestic product (GDP). A new NBER working paper by Professors Botelho, Fehder, and Hochberg highlights this literature and the fact that a small subset of innovation-driven, high-growth startups are responsible for the bulk of the relationship between entrepreneurship and economic growth. That IDE startups have a principal role in this relationship has important implications for venture capital (VC) and the U.S. economy, since venture funding is the most prominent source of financing for IDE entrepreneurs.

Researchers have documented the contribution of the small business sector (where a small business is defined as an employer firm with fewer than 500 employees, per the research definition of the Small Business Administration) to U.S. GDP for decades. U.S. government estimates  place this contribution at 43.5% of GDP in 2014, down from 48.0% in 1998. Equally important is the contribution of small businesses to GDP growth, a critical factor in the rise of living standards, especially in nations with growing populations. The concepts of entrepreneurship and the introduction of new ideas into the economy are central to current understandings of economic growth.

Entrepreneurs are commonly thought of as the conduits by which new ideas are introduced into the economy through new products and services. This idea goes at least as far back as Schumpeter in the 1940s, who characterized entrepreneurs as engaged in a process of “creative destruction,” displacing existing modes of production with more productive ones. Many researchers seized and built upon Schumpeter’s observations, creating an expansive body of theoretical literature focused on entrepreneurial discovery and economic growth which, in recent decades, has emphasized the importance of new firm entry for economic growth.

The importance placed by researchers on new firm entry gave birth to a belief that business dynamics (the process of firm entry, expansion, contraction, and exit) play a fundamental role in economic growth, with some studies showing that new firms disproportionately drive job growth. However, the growth rate of these new firm entrants exhibits positive skewness (i.e., the probability distribution has a “long” right tail with large outliers driving up the mean), hinting that a smaller subset of high-growth, innovation-driven businesses (IDE startups) is responsible for most of the relationship between entrepreneurship and economic growth (instead of new firms in general). This trend holds not only in the U.S., but also across many other developed countries, underscoring the importance of IDE-run businesses in developed economies compared to “traditional” business entrepreneurs who create new businesses but have little desire to grow, innovate, or bring new products to market.

The Critical Role of Venture Capital to IDE Startups

Access to capital is critical for all entrepreneurial endeavors. According to Professors Botelho, Fehder, and Hochberg, most IDE startups are financed through equity—specifically venture capital—given the high degree of uncertainty surrounding the market value of IDE startups whose main asset is commonly intangible, like intellectual property, and who are incapable of collateralizing loans due to a lack of tangible assets. The high-risk nature of funding IDE startups makes venture capital the most sensible form of financing, since successive rounds of VC financing are predicated upon the achievement of business-related milestones intended to ensure the startup is on a path to success while also reducing the riskiness of the venture. Most IDE ventures fail, and the staged format of venture financing allows VC investors to acquire information and judge the venture’s success over a meaningful period with the option of abandoning the venture entirely if sufficient progress is not made.

Although the provision of capital is paramount, VC investors provide much more than a system of financing well-suited to the uncertain nature of IDE startups. VC investors can also be quite active compared to other types of investors and frequently add value to their portfolio companies through the professionalization of startup teams, advising on time to product market, monitoring behavior, board involvement, improving company governance structures, and producing mutually beneficial relationships between portfolio companies and VCs’ networks. Recent research indicates that IDEs are cognizant of the nonpecuniary value-adding benefits of VC investors and are willing to accept tradeoffs to have access to a high value-adding VC. The performance differential between VC and non-VC backed companies attributed to added value services from VCs has been estimated to equal approximately 40%. And VCs with better networks have been found to add more value to their portfolio companies than VCs with weaker networks.

All this is to say that venture capital may play an even more important role in the fortunes of the macroeconomy than was previously thought. Standards of living only increase when the rate of GDP growth exceeds the rate of population growth. Small businesses, and new firms in particular, have long been thought to play a key role in economic growth. But recent research on the disproportionate role that IDE startups may have in this activity merits further investigation on the relationship between entrepreneurship and economic growth, the nature of IDE startups, and the conditions that best allow them to prosper. Given that venture capital is the most suitable form of financing for innovation-driven businesses, further analysis concerning the circumstances and environments that incentivize VC investment will be important to any subsequent research on how best to promote an economy driven by IDE startups.

Why is advancing the next era of venture capital important?

Venture capital is an American national treasure. It has fueled the advancement of innovation, economies, and people. It has created value, jobs, wealth, and life-changing products and services. Though venture capital as an industry may be young and as an asset class may be small, high-growth startups and their long-term investors have truly changed the world.

To continue the success of the industry’s past 50 years to the next 50 years and beyond, we must expand opportunities for people of all backgrounds to access the venture ecosystem and thrive. We must educate future leaders on best practices and help them learn from the industry’s rich history. We must help firms build strong, healthy cultures and values. We must keep the public and ecosystem informed through qualitative and quantitative insights.

By investing in tomorrow’s leaders today, we shape the next era of venture capital.

high-growth startups—across all 50 states and DC—raised venture funding in 2019 to build and grow their businesses.

is the average net jobs created annually between 1980 and 2010 by high-growth startups, which account for ~50% of gross jobs created in the U.S.

U.S. venture firms are active today, managing an aggregate of $444 billion in assets.

This site uses cookies. By continuing to browse the site, you are agreeing to our use of cookies.

We may request cookies to be set on your device. We use cookies to let us know when you visit our websites, how you interact with us, to enrich your user experience, and to customize your relationship with our website.

Click on the different category headings to find out more. You can also change some of your preferences. Note that blocking some types of cookies may impact your experience on our websites and the services we are able to offer.

These cookies are strictly necessary to provide you with services available through our website and to use some of its features.

Because these cookies are strictly necessary to deliver the website, refuseing them will have impact how our site functions. You always can block or delete cookies by changing your browser settings and force blocking all cookies on this website. But this will always prompt you to accept/refuse cookies when revisiting our site.

We fully respect if you want to refuse cookies but to avoid asking you again and again kindly allow us to store a cookie for that. You are free to opt out any time or opt in for other cookies to get a better experience. If you refuse cookies we will remove all set cookies in our domain.

We provide you with a list of stored cookies on your computer in our domain so you can check what we stored. Due to security reasons we are not able to show or modify cookies from other domains. You can check these in your browser security settings.

These cookies collect information that is used either in aggregate form to help us understand how our website is being used or how effective our marketing campaigns are, or to help us customize our website and application for you in order to enhance your experience.

If you do not want that we track your visit to our site you can disable tracking in your browser here:

We also use different external services like Google Webfonts, Google Maps, and external Video providers. Since these providers may collect personal data like your IP address we allow you to block them here. Please be aware that this might heavily reduce the functionality and appearance of our site. Changes will take effect once you reload the page.

The following cookies are also needed - You can choose if you want to allow them:

The Venture Capital Foundation is funded through tax deductible contributions that support shaping the future of VC, its narrative, and its legacy.